The changing fortunes of Boris Johnson through the Brexit campaign, momentous vote and earthquake aftermath are nowhere more apparent than in the pages of Rupert Murdoch’s right-leaning Sun and Times newspapers. 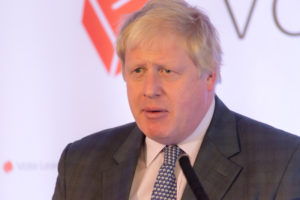 Perhaps in a sign that their notoriously-opinionated and influential proprietor was hedging his bets, the Sun firmly backed Brexit and with it its mop-haired cheerleader-in-chief while the Times warned its readers of the perils of isolationism.

The space provided in newspapers to a particular viewpoint is often a good indicator of the paper’s own agenda. The Times provided ample column inches to business leaders to air their concerns, while also painting the former London major as pushy, a pisshead and even digging out a Turkish cousin to slate him.

Tables show number of articles containing just a mention of Boris as opposed to those which focused on him in some way. Average sentiment is also shown next to them where positive is good, negative is…negative and 0 is neutral. Scale operates between 4 and -4.

On the eve of the vote, the Sun’s backing for Boris climbed to its staunchest level as he took to the skies in a helicopter to criss-cross the country to Brexit’s chances.

In a page spread, The Times gave both Johnson and Cameron a fair hearing on the main points of the debate. But it also gave a lengthy outing to the viewpoint that Johnson had only pursued Brexit for personal political gain rather than out of conviction, portraying him in several articles as a turncoat who had stabbed his old school friend Cameron in the back.

When the unexpected Brexit victory was delivered, the Sun stood by its man despite the turmoil the vote unleashed in the Tory party following Cameron’s resignation.

Despite his slightly underwhelming reaction to the vote, it reported favourably on his chances as PM and gave him a good showing in coverage of the tussle of contenders for the top job.

The Times too exhibited something of a grudging respect for Johnson after the result, urging readers in an editorial to move “Forward Without Rancor” and backing the man it once derided as a clown as “statesmanlike”. Having previously been reticent to give Johnson too many mentions, it did so most of all after Cameron’s resignation, carrying the most positive pieces of the entire saga.

The love-in was, however, short-lived, and as Johnson’s lack of clear plan began to show, so his popularity began to wane in both newspapers. Boris’s Telegraph column in which he mooted a third way of staying in the single market and accepting some immigration reflected, The Times said, in a later editorial, “not just tiredness but a lack of clarity in his thinking”.

The Sun highlighted the Brexit champion’s “flip-flopping” on policy, and began to flirt with working class PM candidate Stephen Crabb.

By the time the moment came for Boris Johnson to bow out of the leadership campaign, neither paper showed the sympathy exhibited for him by other papers over former wingman Michael Gove’s treachery.

The Sun carried a piece by his former biographer entitled: “The Closer You Get The Less You Like Him”, and another describing the former Henley MP as a “Marmite figure” whom more Tory MPs hated than loved. The Times went one better, sending a reporter to Henley Royal Regatta where former constituents were searing in their criticism of him, with one, a Mrs Prest, describing him as a “knobhead”.

So there it was: fear, pride, surprise, vengeance, bemusement and disgust, all had an outing in two weeks of two newspapers’ coverage of one of the most significant sagas in modern British political times. Proof, if you needed it, that newspapers are not too different from their readers, changeable, swayed by emotion and not too good at holding the line.

Graphs below show the themes the Sun Online and the Times Online chose to include Boris in. They show the sentiment towards him in relation to the theme. Both are equally positive about him overall when he was referenced in relation to Cameron’s resignation for example. 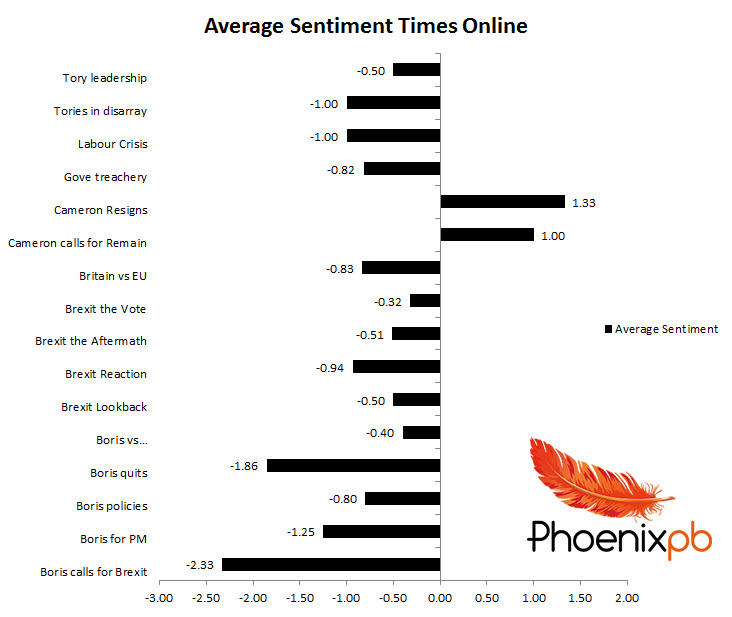 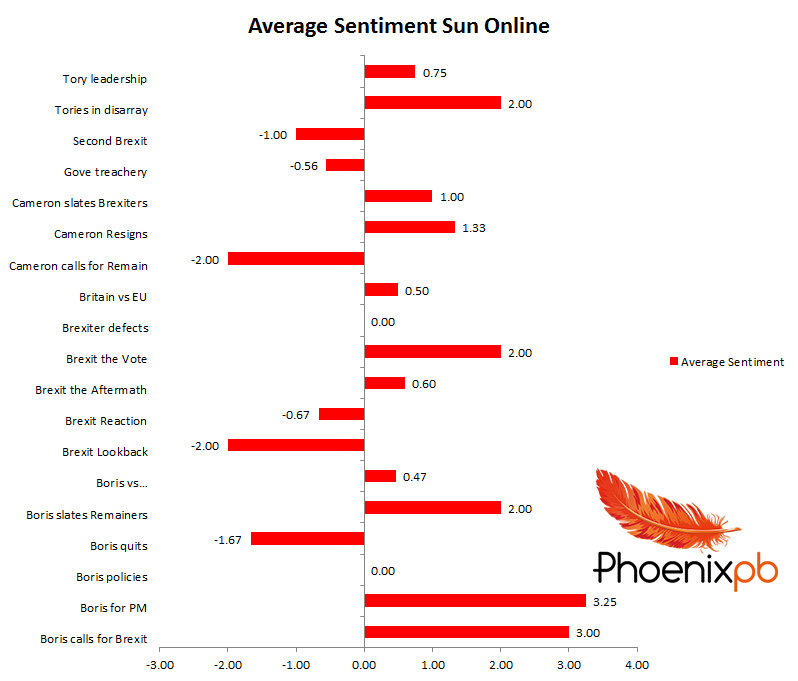 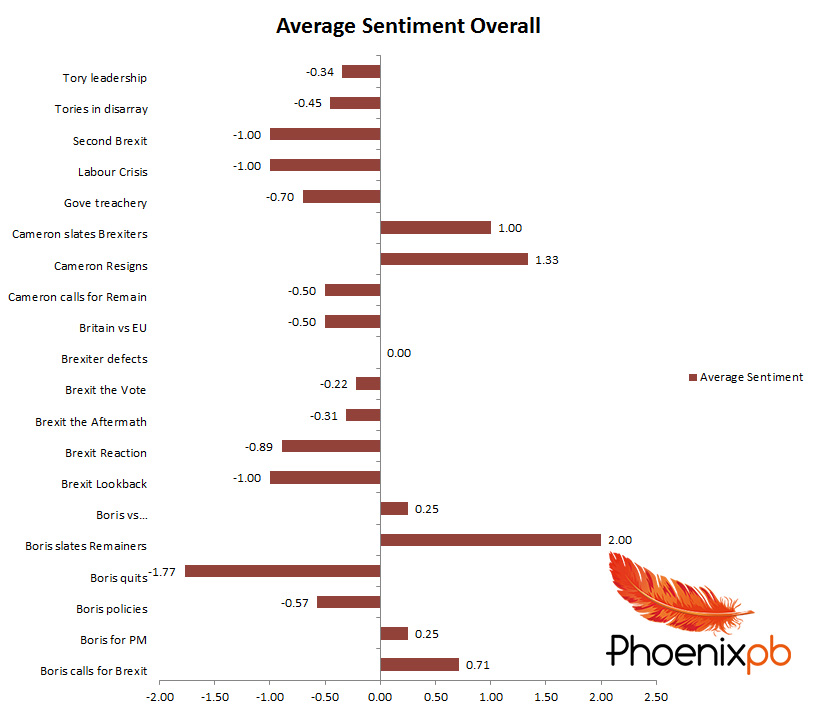